One morning, Jerry and I were sitting across from each other at the kitchen table.

“Talk to each other,” my mom said.

So I kept my distance.  I spent long hours playing imaginary games in my room, waiting for moments when I could steal my mom away and be with only her.  As an eight year old, I was a silly one (can you just imagine), and I know I talked too much.  He was opinionated and quick-tempered, and rather intimidating.  The only thing that brought us together was our mutual love for my mom.

Seattle fans will tell you that our whole area has been under a “Northwest curse” for years, where playoff appearances and champion rings have been few and far between — if they exist at all.  So when a team starts to win, it captures the hearts of the whole city, and everywhere nearby.  At that time, the Mariners had never been in the playoffs and would fade in the background of every Seattle summer.  In August of 1995, as usual, they were over 10 games behind the first-place team in their division, when a peculiar thing happened: the Mariners started to win.  They went on a rampage and, surprising everyone, caught up to the first-place Angels.  Everyone was talking about it — the people on the news, the lady at the grocery store, the kids at school.  We’d make up chants while waiting in line, and turn the radio on to listen to the games during class.  I knew nothing about baseball, but even I was hooked.

I started to watch the games in my bedroom at night, memorizing the starting line ups and falling in love with the faces of our ragtag, unpretentious Mariners — Joey Cora, Edgar Martinez, Jay Buhner, Ken Griffey, Jr.

And one evening, I’m not even sure why, I mustered up the courage to walk into the kitchen, where my stepdad was also watching the game…and to join him.  It became our “thing.”  We watched the Mariners win the one-game face off with the Angels — Randy Johnson, his hands pointed up to the sky in victory.  We watched as Ken Griffey, Jr. scored the winning run to beat all odds and defeat the Yanks in our first-ever round of playoff games. We watched them right to the end of their crazy ride that year, when they were finally stopped by the Indians — I can still picture Alex Rodriguez wrapping his arm around a weeping Joey Cora in the dugout after the loss.

But so much more than baseball was awakened in our hearts that summer.  Jerry and I had found something we could enjoy together, and experience together, and hope for together.  It opened the door for real relationship, and everything after that was different.

I can’t say that Jerry and I were ever especially close, and there are certainly many memories in our family I’d rather forget.  But he loved me, and I loved him.  He was deep, passionate, emotional.  He was a writer, a teacher, an artist, a speaker.  In years that followed, it ended up we had much more in common than we had ever known earlier.  I’m thankful for those ways that he influenced me, and I’m thankful for that summer, when baseball saved our family and paved the way for all the other good times we shared.

Jerry passed away this past April.  The Mariners lost for a whole week after that day.  Now, they’re back in a playoff race, and I’m thinking it would be pretty special it they made it this year.

I was seven years old the first time I saw my dad cry.  It was the end of a long road trip from California to Oregon, our last as a family.  My brother and my dad were just about to jump on a train headed back to California, and it was time to say goodbye.

I know it sounds cliché, but things truly were never the same after that day.  Instead of seeing my dad and brother every day, I saw them every summer – just once a year.  I’d be lying to you if I said that everything was awful after that, or that it ruined my childhood.  The truth is that both of my parents remarried rather quickly, and I ended up with two quite stable families that loved me dearly.  The truth is, I never felt unloved a day in my life.  But through it all, there was a loss that tainted everything.  Members of my own immediate family had never met my friends or stepped foot in my schools, never saw the color I painted my bedroom, never attended a band concert or a softball game.  So many missed Christmases, and birthdays, and more than that, so many missed normal, everyday kind of days.  And even when summertime came, it was tainted by the looming realization that our next goodbye was only weeks away.

How sad it would be if our story ended there, and for many years, I thought it might.  But, dear friends, God loves us more than we could ever know, and while I was busy for years protecting my own heart from further loss, He was lovingly healing, and restoring, and changing me bit by bit…and teaching me the meaning of this word, this beautiful, God-inspired, Gospel-saturated word: redemption.

Redemption is taking the broken things and making a masterpiece.  Redemption is not only finding what was lost, but replacing it with something better.  When God revealed to us the ultimate picture of redemption in Jesus, He didn’t just pull us out of the pit, He raised us up to the heights and glories of heaven.

Redemption.  Redemption is feeling the freedom to love both of my families with my whole heart.  Redemption is victory over fears that once shackled me and hindered my relationships.

Redemption doesn’t belittle loss, or brokenness, or sin.  It doesn’t erase the sad things; it doesn’t rewrite the past.  But it adds a new chapter.  It adds hope, and purpose, and life to what seemed to be only darkness.  Somehow, redemption makes our stories sweeter, richer, and more powerful than if the bad things had never happened.

Redemption.  Redemption is New Year’s in our jammies, and late-night talks with brothers, and a full dinner table on Christmas night.  Redemption is In and Out burgers with my dad, or showing my big brother around Bangkok – a city I’ve come to love.

And this summer, Redemption will be living in the same state, the same city, the same house as my dad for the first time since I was seven years old.  Redemption will be seeing my little brothers start college, getting to know my brother’s girlfriend, spending everyday life with a mom I never had the chance to know in depth.

People sometimes ask me how it feels to be adopted.  And usually I say to them, I don’t really know.  Imagine growing up, and instead of being told that babies come from mommy’s tummies, you were told that sometimes babies come on airplanes from faraway places.  Imagine looking through your baby album and instead of seeing Mommy holding you for the first time in the hospital, you see pictures of Mommy holding you for the first time at a crowded airport. Imagine if your family that looks nothing like you is the only family you’ve ever known.

Then imagine how surprising it would be, after loving your mom and dad and brother since before you can remember, being asked for the first time, “So where is your real mom?”

But it’s not just my family — it’s my culture, my identity, my values.  I never grew up dreaming of Korea.  I dreamed of Disneyland, like every other California kid.  I never noticed that my baby dolls didn’t look like me, or that no one in the movies looked like me either.  I never thought there was anything in me but America.

Fast forward to 2009.  I move to Asia.  (And for the record, it wasn’t my idea, totally God’s!)  And in Asia, people see things from a whole different viewpoint.  In Asian culture (I’m generalizing, here), if you’re Asian, you are Asian.  And being Asian trumps everything else.  I am asked daily where I come from, and when I tell people America, they 1) tell me I don’t look American 2) shake their head and look at me funny or 3) on rare occurrences, they might even scoff or laugh.  Thais have told me since I moved here that people will feel more comfortable around me and relate to me more simply because I’m Asian.  I think it even causes people to have different expectations for me, and how I will act, and what I will say.  Sometimes this makes me feel misunderstood, and it makes me fear that I am disappointing people.

While my family and community back home made me feel special for looking the way I do, now I feel grouped into one huge mass of people I don’t even really know well.  Imagine being identified every day by your ethnic background, after never thinking twice about it your whole life long.  While back home, no one ever questioned my American status or made me feel like an outsider,  all of a sudden, in Asia, I’ve realized that the rest of the world sees me in a totally different light.

And do you want to know the worst part? 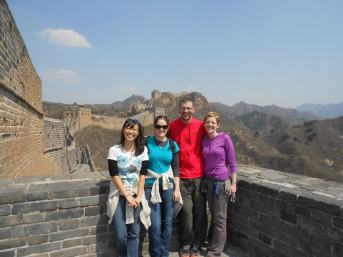 My friend, Clare, and I took a trip to China last week.  It was ah-maaaaazing.  Our favorite part — not surprisingly — was hiking along The Great Wall.  And on that glorious day, we had the privilege of running into a couple from America who was in the country to pick up their newly adopted Chinese daughters.  They said it was God who moved their hearts, and led them to China, and gave them love for two children they’ve never even met.  Oh, to think of the story those little girls will carry, and the way that this family is touching a culture by bringing a piece home to embrace as their own.

It made me think that maybe my own story, cultural confusion and all, will turn out to be a testimony that crosses the borders of culture and color.  And if those new parents asked me for a word of wisdom, after all I’ve been learning and observing, I would tell them this: “Love Asia, because you love them, and Asia is in them.  And because they love you, they’ll love Asia too.”